In 2008 I have published a similar post. Wow, that’s six years ago – or 28 Internet years – that post is basically a classic already.

Today I decided to post an update. Interestingly, there are not that many changes – which probably shows how well that system is working for me:
The most noticeable addition is that I’m using mosh instead of ssh more and more, especially on the smartphone, through the Mosh-enabled Irssi ConnectBot App, which I launch directly from the IrssiNotifier App that brings up a notification when someone sends a message to me. IrssiNotifier leverages Google’s Push notification system, which makes it resource efficient – and the messages are end-to-end encrypted from my server to my phone. The mosh protocol makes it fun to work in a terminal, even if the server is far away and you’re changing between WLAN, 3G and back frequently through its roaming ability and the local echo. 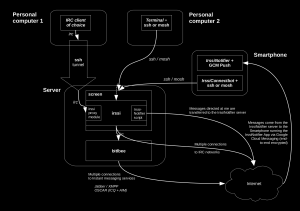 That said, I also use WhatsApp more and more, for the same reason why I used to use ICQ many years back: Everyone has it. Let’s see how this will have evolved in another six years! 😉