I have been using Tiny Tiny RSS (or TT-RSS) (www-apps/tt-rss in Gentoo) as my news aggregator since the end of 2008. It is a web application (written in PHP) that provides a great news aggregator UI. Since it’s a web application, you can use it from anywhere with just a browser, and thus have all your feeds in the same state (read/starred/…), anywhere you are. Think of it as Google Reader, but without Google knowing exactly what news articles you’re interested in, since you can run TT-RSS on your own server / web host.
So, TT-RSS alone was great already, but the UI is more suitable for when you have a mouse and a big browser window, than for using it from your phone.

Recently I discovered the Android App TT-RSS Reader which solves exactly that problem. It connects to your TT-RSS instance via an API, and brings all your feeds, with all their states just as on the web interface, to your Android device. The interface is specifically designed for touch screens, so it’s much easier to navigate through your feeds and articles than via the web interface. Furthermore, it can cache articles and images, which you can trigger while on WiFi before leaving the house, and then read everything on the way in Offline mode, to save mobile traffic, which is expensive and/or slow for some. When you’re back on WiFi, you switch back to Online mode, and TT-RSS Reader synchronises your state to your TT-RSS instance. Absolutely awesome 🙂

A couple of quick screenshots from the web interface (TT-RSS): 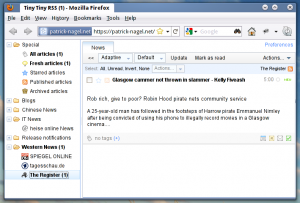 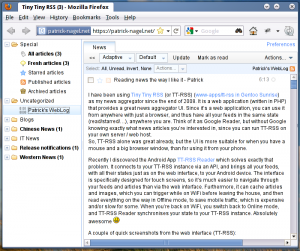 … and the Android App (TT-RSS Reader): 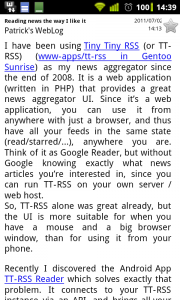 Update (2011-07-03): Shortly after posting this, hwoarang offered to take TT-RSS from the Sunrise Overlay into Gentoo’s main repository (Portage), with me proxy-maintaining it. So now it’s even easier to get TT-RSS onto your Gentoo-powered server.

2 thoughts on “Reading news the way I like it”